After a devastating flood in the 1940's, the Upper St Johns River Basin Project was planned to control flooding on the St. Johns River in Osceola, Brevard, and Indian River Counties. One component of this project is Canal 54 (C-54). Located along the county line of Brevard and Indian River Counties C-54 was originally designed to divert water from the Upper St. Johns River into the Indian River Lagoon. The upper basin project was redesigned in the 1980s to address environmental concerns with the original design and the role of C-54 changed.

As part of the original upper basin project, C-54 discharged directly from the St. Johns River to the lagoon. However, C-54 is no longer directly connected to the St. Johns River  but instead serves only as an emergency overflow for the St. Johns Water Management Area to ensure that extreme flood events do not overtop the flood protection levees.

In the historic and unprecedented 2004 hurricane season, nearly 4 feet of rain fell on east-central Florida during a 60-day period. The rainfall statistics were phenomenal --a series of storms that would only be expected once every 200 years. Both water levels and frustration levels were especially high in the Middle St. Johns River Basin (Lake Harney north to Lake George, including lakes Jesup and Monroe), and as the river overran its banks, some called for the St. Johns River Water Management District to provide flood relief by releasing water from the St. Johns River to the Indian River through C-54, located about 120 miles to the south.

Contrary to popular belief, the use of C-54 to release water from the heardwaters of the St. Johns River would have provided no flood relief to the middle basin (east-central Florida). During 2004 floods, the upper basin project operated as designed to provide flood relief within the project area. However, the project does not provide flood protection in the middle St. Johns River area.

Water management district engineers have concluded that the flooding that occurred on lakes Monroe and Harney in 2004 was due primarily to local rainfall conditions and that greater use of C-54 would not have reduced the damage caused by these floods.

The elevation of the Fellsmere Main Canal at Park Lateral is about 8 feet above Sea level normally and C-54 in that location is 16 feet above Sea Level. Because of the required discharge limits placed on C-54 to the Indian River Lagoon and the elevation (16 feet above sea level) it is kept at, it is no longer feasible to try to open the cross over culvert.

C-54 Cross over culverts at Park Lateral and Main Canal 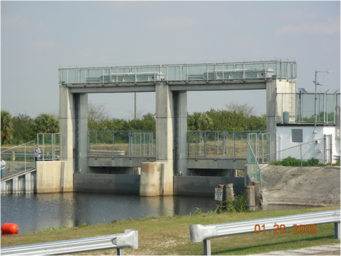 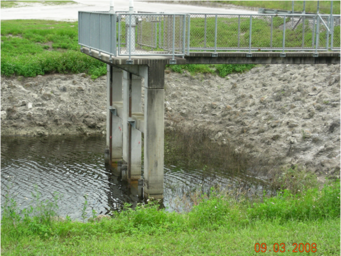 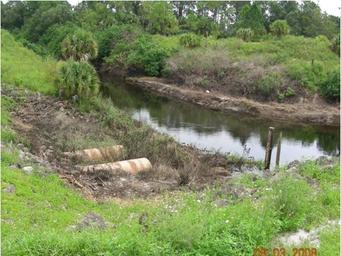 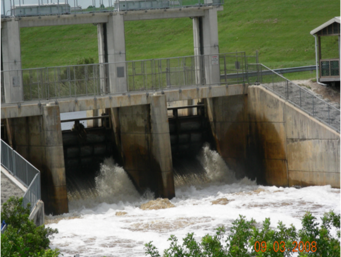